A quick announcement that Zelda: The Magazine of the Vintage Nouveau's Issue 4 is NOW available on http://www.zeldamag.com/ ! We have some special new things going on with the site- the first of which is an exciting new design! Check out Zelda's blog on our main page with Zelda and vintage news of all kinds! We are also excited to release the new Vintage Shopping Guide- highlighting some of the most exciting offerings from our sponsors!

THE FEATURES IN THIS ISSUE:

If you haven't gotten your hands on Zelda yet or would like to send issues to a friend, now's the time! We are proud to offer our four issue bundle (one of each issue 1-4) for only $25 domestic or $35 international! That's a $5 savings for domestic delivery, and a whopping $11 savings on international orders! All prices include shipping.

Thank you for your support of Zelda, and I hope you enjoy reading issue 4 as much as I have enjoyed bringing it together!

It’s that time again where I’d love to share our vintage resource list from Zelda : The Magazine of the Vintage Nouveau (http://www.zeldamag.com)! Our third issue came out in October 2010, and we have a lot of fabulous vintage finds to check out...and do tell them Zelda sent you! The list is under the cut...( Read more...Collapse )

Too long since your last cotillion, safari, or what-have-you?
No place to rock that bangin' vintage outfit?
Have you been to the Casbah?

Ladies and Gentlemen, set your time machines for..... I wanted to let everyone know that the new issue of Zelda : The Magazine of the Vintage Nouveau is now available online! Our cover story in this issue is a never-published interview with Charles "Buddy" Rogers : known as "America's Boyfriend", star of 'Wings', and husband to Mary Pickford! There are amazing stories in this piece, including a tale about the very first Academy Awards.

There's a sneak peak of some of our pages on the website as well as some bonus vintage recipes to try!

We're also featuring a vintage holiday gift guide on the Zelda site! Check out some fabulous resources for shopping for that vintage lover on your list this season! :)

I hope you enjoy!

I wanted to share a bunch of vintage resources with you...these are the sponsors for the second issue of Zelda : The Magazine of the Vintage Nouveau (http://www.zeldamag.com), which came out in April of this year...SO many great places to check out! And tell 'em Zelda sent you! ;)

Someone once said that a gentleman is "A man who knows how to play the bagpipes - but doesn't".
I always took this to mean that a gentleman is a fellow who has at his disposal a wide range of skills and abilities, but also has the discretion and modesty to keep quiet about them until they're needed. If you ask me this takes fun out of being able to do stuff in the first place.

Of course, showing off isn't the mark of a gentleman. It's the mark of a cad. A bounder. A downright rotter. No prizes for guessing which side of that divide I'm aiming for, though, eh?
Anyway, thinking about it last night, it struck me that a cad does not have skills; he has 'social accomplishments'. By social accomplishments, I mean those little abilities which are of no actual value whatsoever except just looking pretty cool when you do them. You know, things like raising one eyebrow in a quizzical manner. As far as I'm concerned, half the point of privately working hard to be able to do things is so you can do them in public in an offhand, casual way and then look mildy surprised and a bit disappointed when other people can't do them: so being able to play the bagpipes and then not doing so just doesn't count.

Off the top of my head, a cad should be able to:

• Raise one eyebrow.
• Mix (or order) a martini without suggesting that doing so makes him James Bond.
• Perform a perfect riffle shuffle of a deck of cards.
• Blow a smoke-ring.
• Whistle for a taxi with 2 fingers in your mouth.
• Tie a proper bow tie, simply to make everyone wearing a pre-tied elasticated one look uncomfortable when you untie it after dinner.
• Undo a bra with one hand.
• Strike a match with a thumbnail, or light a zippo with one flick.

What else should a cad be able to do?

I was about to post this on a steampunk comm, but my eye wandered over here.

This man's clothing made me think of my variety of male steampunk fashion. This video reminds one of A Clockwork Orange. I'm not exactly sure what this song is talking about, but the beginning is fantastic.

What do you think of the dancing of the lead singer or others?

Disclaimer: I have no idea who this MIKA is and whether people such as us loathe him because I'm extremely out of date with popular music.

ukmonty won’t be in the least bit surprised to learn that he is a member of a private, members-only cocktail bar in Soho. It isn’t the sort of place which minor celebrities are pictured staggering out of at 3am without any knickers on. Of course not – it’s rather more exclusive than that. Instead, it’s the sort of place you find down a side street and behind an anonymous, unmarked door that you need a password to get through. A password! It’s my sort of place.

Inside, it’s decked out in a decadent 1920’s/30’s style, rather like the first class lounge on the Titanic would have looked if they’d decided to spend a bit more on it; wooden panelling, art-deco ornaments and plump armchairs are the order of the day. They play a jaunty selection of 20's jazz hits and the Whisky selection is pretty much a who's who of major distilleries. The staff are uniformly attractive and unobtrusive and I barely noticed as the waitress shimmied up as we sat considering the cocktail menu last night.

I looked at the options. A Gin Sling? A Screwdriver? In the end I settled for the Alcoholics Delight, which appeared to consist of a shot of everything behind the bar in a bucket with a fried egg on top. She turned to Monty.

Monty regarded his menu with something of a pensive air. He tapped a finger. “A Moscow Mule, please”, he said, thoughtfully.

“Certainly, sir. Will that be strong, or low alcohol?”
I gave a loud guffaw. Low alcohol? Plainly this woman did not know Monty.

My head shot round like it was on a spring. Had I heard aright? “What?", I said. “Are you quite serious?"

He nodded, rather more firmly this time. “Low alcohol”, he confirmed.

The waitress sashayed away and I opened and closed my mouth like a confused fish. “But, Monty!” I cried. “You...it...booze...drinking...low alcohol”, I explained further.

Monty had the grace to look a little crestfallen. “I know”, he said. “But...I’ve started getting hangovers. Now I understand what you lot have been going on about all these years. And anyway,” he added, pointing ruefully at his tummy. “My liver. Size of a football, you know.“

“Tommyrot”, I said, firmly. “Your liver would need Kryptonite to stop it, and believe me that’s not the green colouring in absinthe.”

But so the evening went on. As I wrapped myself around a series of spectacularly inebriating drinks like the Dialysis Supreme (“We pop a funnel in your mouth and keep pouring gin in until you pass out. With a dash of sours and an olive”) and the Boozeguzzler ("We’re not telling what’s in this one, but trust us when we say drinking it will invalidate your life insurance”), Monty sipped abstemiously at small port. I felt utterly confused. “So…” I said, trying to change the subject. “What plans have you for the rest of the week?”

I nodded. At least some things haven’t changed.

I wanted to invite those of you with an interest in cooking and yes, eating to

vintage_chefs. I thought it would be interesting to create a community for those of us whose love of all things vintage and traditional spilled over into our love for food. A community to replicate heirloom recipes and show off our antique kitchen appliances,vintage cookbooks, recipes and dishes. 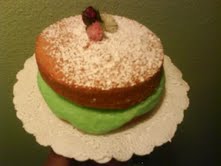